Request Appointment
Text Us
Email Us
Get Directions
Call Us

Its more than grooming, its PET STYLING!

Positions open. Think you have the right stuff?

Ask about our financing

While owning a dog brings much love and joy to our lives, the unpleasant part is dealing with injuries and other medical problems that arise from things like ticks.

Despite popular belief, dog owners need to be aware of ticks all year round, especially since there are about 800 species of them!

Dog owners might not recognize symptoms of tick fever in dogs or other tick-borne illnesses. Keep reading to educate yourself so you understand what you need to look for. 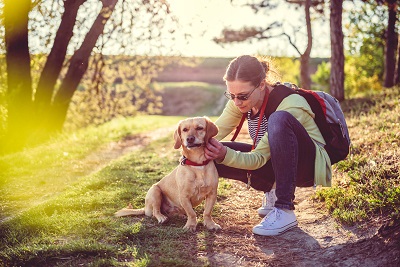 Ticks are types of species called an arachnid, and their closest relative is spiders. They are parasitic, meaning they thrive on other creature's blood, and quite small. Once they find a host, they feed by sucking blood which causes them to swell, and this is typically when you start noticing the appearance of the tick.

While some ticks are harmless, others carry potentially life-threatening diseases and infections. This is where the trouble begins. When a tick bites into the skin and begins feasting on blood, they transfer diseases into the host, and the host then becomes infected as well.

Ticks are found almost everywhere in the United States and are most active in the warmer months like spring and summer. However, it's important to keep your dog protected all year long.

What Are Some Symptoms of Tick Fever in Dogs?

The dangers associated with tick-borne illnesses in dogs are very real and could cost your dog their life.

It's important, especially after being in woodsy areas, to check your dog for ticks and keep a close eye on them for symptoms. Some symptoms may not arise for several months after exposure, or even years depending on the type of disease.

Here are some symptoms to look out for:

These are a variety of symptoms your dog might experience. Some symptoms may overlap or are unique to the disease, so you must get your dog to the vet so the can treat the proper disease.

Because there are so many ticks, each of them transfers different types of diseases. Your dog can also become infected by more than one tick.

Here are some of the most common tick-borne illnesses to be aware of.

Lyme disease is probably the most common and it infects humans as well. Deer ticks are carriers of Lyme Disease. Your dog may not show symptoms for several months, but Lyme disease can be successfully treated with antibiotics.

Ehrlichiosis is another type of tick disease that is carried by a brown dog tick. Ehrlichiosis is hard to diagnose given the range of symptoms it displays and because the immune system responds several weeks after the tick bites.

This disease is broken into three stages: acute, sub-clinical, and chronic. With each stage, the symptoms differ and the disease becomes progressively worse if it goes undetected.

Another tick-borne illness is Rocky Mountain Spotted Fever. Carried by the American Dog Tick, Wood Tick, and Lone Star Tick, this disease can be fatal if not treated. A common symptom with this disease is neurological symptoms like paralysis or trouble walking.

One of the most serious illnesses is Cytauxzoonosis because the bite is deadly and the disease is incurable. Methods exist to manage the Cytauxzoonosis, however, the disease progresses quickly, and within a month it could be too late.

Babesiosis is a disease that breaks down red blood cells. Dogs can catch it from ticks, but also from other dogs that bite or even blood transfusions. The American Dog tick and the Brown Dog tick are carriers of Babesiosis.

The Black-Legged Tick carries Anaplasmosis with symptoms similar to Lyme disease. It's dubbed 'dog tick fever' and is infected by the deer tick. Anaplasmosis is known throughout the world.

How to Prevent Infections From Ticks

The threat of tick illnesses to both dogs and humans is very serious, so taking precautions to protect your dog and getting rid of ticks could save your dog's life.

One of the best preventative measures you can take is to check your dog daily for ticks especially if they're around woodsy areas or you've just returned from spending considerable time outdoors. Removing the tick within 24-48 hours gives your dog to best change to be spared from any diseases.

Other methods are monthly medications, which is usually a combination of both flea and tick control. This may be a good choice if your dog is outside often.

Tick collars are another option and are used to repel ticks or kill them before they have a chance to infect your dog.

Tick diseases are not a wait-and-see approach given the seriousness and potential fatality of the disease. Once you know the symptoms of tick fever in dogs, in most cases they can be treated quickly. The sooner they are seen, the better!

Do you need to find a veterinarian to learn more about tick illnesses? Contact our office and set up your appointment today!

Connect with us!
Signup to get our App